Carry trade disruptions as the waterfalls provide a good soaking

There has been a lot of commentary recently about the inverse relationship between the US Dollar and the S&P 500. What is perhaps more extraordinary from an inter-market analysis perspective has been the very strong correlation between one of the principal carry trade pairs - the Australian Dollar/Japanese Yen - $AUDJPY - and the MSCI Emerging Markets Index. 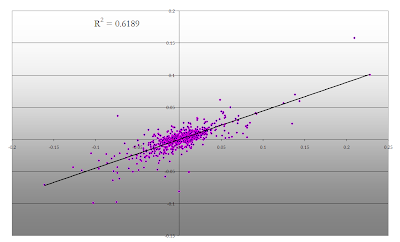 Using the daily changes in the EEM and the daily changes in the North American closes for the cross rate, it is possible to derive the correlation coefficient value and the chart above shows the result of the linear regression of daily changes from the beginning of January 2007 through the close on October 30, 2009. The coefficient of determination or R squared value for the relationship is approximately 0.62 which is one of the highest positive associations that I have encountered between a currency and an index.

An alternative way of considering the relationship is to normalize the paths taken by the two instruments using as an index base the values as of January 3, 2007 and placing the trajectories on the same 2 dimensional graph. The graphic below shows the remarkable extent to which the paths taken are correlated. 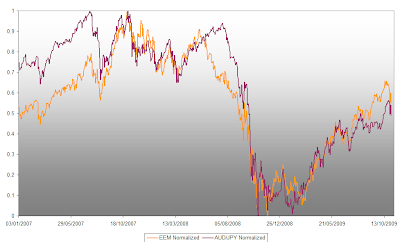 While correlations are interesting to observe there is often the implied question of so what?

This brings us to the takeaway proposition which is that the strength of the US dollar and perversely the Japanese Yen - which both, for different reasons, become the sought after currencies when traders/investors lose their appetite for risk - has a big impact on the attractiveness and viability of the carry trade. Put simply if the carry trade begins to lose its appeal - and both legs of (say) the Aussie/Yen trade are going in the wrong direction from the point of view of those long the carry trade - then there is a period of rapid unwind which can be very disruptive, especially for those asset classes which are being funded by proceeds and financial engineering predicated on the carry trade.

Returning to the high R squared value - this has existed across the almost three year period under review and shows that when the currency pair drops so does the EEM.
In the last few sessions the currency pair has been exhibiting some erratic behavior which is of a hybrid nature - a roller coaster ride with spectacular waterfall like features for the passengers to really give them a good soaking.

As the carry trade loses its appeal so does the appetite for risk assets and this becomes part of the larger framework in which dollar strength - resulting not only from the actual unwinding of many other currency pairs but also from the flight to safety mindset - is not a positive for global equities.
No comments:
Email ThisBlogThis!Share to TwitterShare to FacebookShare to Pinterest
Newer Posts Older Posts Home
Subscribe to: Posts (Atom)