Many emerging market ETF’s at present are showing extremely elevated technical readings - RSI, ADX etc - and the chart for TUR, which tracks Turkish equities is a good example. The weekly RSI value of 85 is quite exceptional as is the weekly ADX reading of 46. 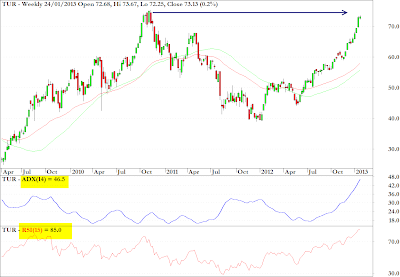 Undoubtedly Turkey is one of the more promising of the emerging markets but a 62% increase in the last twelve months and a 14% rise in just the last 30 days suggests that a lot of very positive sentiment about its prospects is already discounted. In addition yesterday’s closing price is less than $2 from its all time high registered in November 2010.

ZROZ: Be careful what you wish for

In an extraordinarily low interest rate environment the greatest risk to fund managers with portfolios overflowing with corporate, high yield and treasury bonds lies with low coupon and long duration paper. That risk is extremely well depicted in the following graphic which shows the ZROZ, a PIMCO sponsored exchange traded fund which tracks extended duration zero coupon instruments - the lowest coupon instruments on offer until someone comes up with the idea of a negative coupon!

The daily chart over the last few months shows several thrusts down for ZROZ followed by retracement patterns which once again are met by renewed downward pressure - a pattern which could be described as a bear flag downward staircase. There is a pattern of descending highs and lower lows and the risk is that the present area of support looks quite fragile. 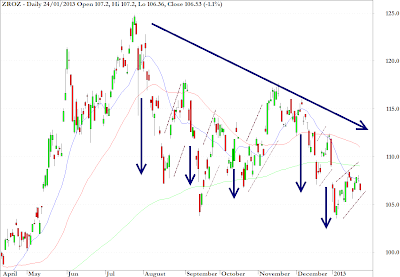 The old saying be careful what you wish for would seem especially apt with regard to the mania for spikes in risk appetite every time there is positive real economy news. More than ever financial markets are detached from the main street economy and the real risk to enlivened animal spirits is that at some point questions will becoming pressing as to how do policy makers articulate and implement an exit strategy from the entirely artificial financial economy currently being propped up by the unprecedented generosity of Messrs Bernanke, Draghi, Abe and others.