Just a follow up on some charts that were discussed here last week. The exchange traded fund, TUR, which tracks Turkish equities was cited as looking over extended with a weekly RSI value above 80 and a weekly ADX reading near 50. Such elevated values are found quite rarely and are good harbingers of the likelihood for corrective price action. Price action during the last two trading sessions has indeed resulted in a more than 5% drop in the stock. The daily RSI chart and the probable support at the 50 day EMA around $66 (also close to the 200 day EMA) suggests that a further drop of another 5% could well ensue. There is no short recommendation at this point, and in fact the preference would be to look at the long side for a trading bounce after the correction has run its course- for an entry keep an eye on a basing pattern to the daily RSI. 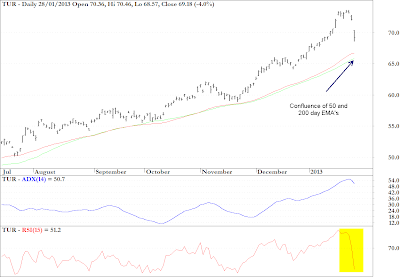 EUR/GBP delivered the initial target value of 0.8550 that was discussed here last week and following a short term correction which is now under way I would still be targeting 0.8660 within the next few sessions.

As of Tuesday morning (Jan 29th) EUR/JPY has, after an extended and vigorous bullish phase, also begun to correct but as suggested the underlying dynamics for this pair remain solidly in favor of the long side. It is becoming more apparent that, with benign neglect of its own currency being the preferred stance of the BOJ and Japanese government, USD/JPY is ultimately set for a test of the 100 level. Since I do not see much likelihood of a serious correction to EUR/USD the inference for the euro/yen rate is that a rate in the 130’s remains the intermediate target as suggested here 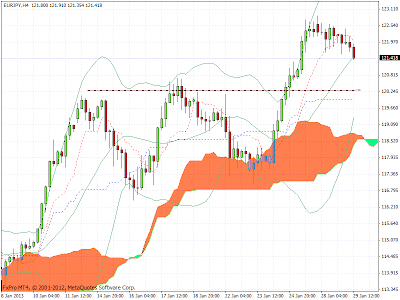