Following the widespread adoption of "unorthodox monetary policies" it has been apparent to some commentators that central banks have had as a stealth agenda the depreciation of their currencies in a battle for enhanced exports (among other objectives). A Morgan Stanley analyst has now issued a note that the rapid decline of the Japanese yen may have finally galvanized the attention of mainstream analysts to an outright currency war.

The following comment from the analyst is cited here

Japanese policy has changed the game: Japan’s policy-makers now want to end deflation and reinvigorate investment. Given the export-orientation of Japan’s economy, the role of the yen is likely to be much stronger for Japan than the dollar is for the US economy. This creates the risk of bringing into the fray the one, all-important element that was missing before – competitive depreciation. Any further monetary expansion by a major central bank may now prompt Japan’s policy-makers to take retaliatory action to weaken the yen. If they do, EM currency appreciation would be collateral damage.

The adjacent chart depicts one dimension to the consequences of competitive currency debasement. Illustrated is the relative performance of the Nikkei 225, the USD/JPY exchange rate, the EWJ fund which tracks the MSCI Japan Index but which trades in the US and thus includes the currency conversion from yen to dollars (unlike the Nikkei itself which is of course denominated in local currency terms), the KOSPI Composite Index - the benchmark for South Korean equities, and also the iShares sector fund EWY which tracks the MSCI South Korea index (again priced in US dollar terms). 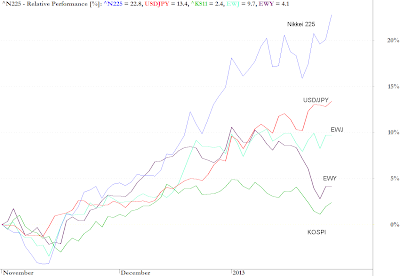 One of the most striking correlations in major financial markets is the inverse relationship between the yen and the Nikkei 225 with weakness in the former resulting in strength in the latter. The underlying variable which would explain the very high degree of negative correlation is the conviction that there will be increased competitiveness of Japanese exports as the yen weakens - even more pertinent at present since Japan has moved from a history of surpluses in its overseas trading account to a significant deficit in 2012.

The Nikkei had a 250 point surge in overnight trading (Jan 30th) and is now above the 11,000 level for the first time since April 2010. Using November 1st of last year as the base date for the assessment of relative performance, the Nikkei has moved up almost 23% while the dollar has strengthened by more than 13% in the same time frame against the yen. Unsurprisingly the EWJ fund - after currency conversion and notwithstanding that the MSCI index composition is slightly different to that of the Nikkei - has registered an almost 10% upward move.

The currency wars dimension which provides a sharp contrast to positive developments for Japanese stock market investors (both domestic and to a lesser degree non-yen based investors) can be seen in the very subdued performance of equities for South Korea, one of Japan's main trading competitors. In local currency terms the KOSPI has only managed a 2.4% increase since November 1st and for the US dollar adjusted sector fund, EWY, this is barely different with a 4% performance during the equivalent period. 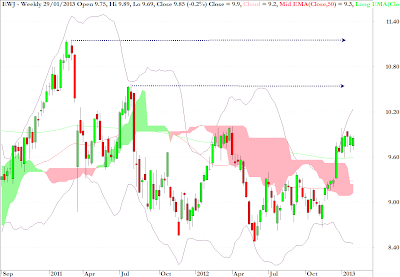 The EWJ weekly chart shows that the current price has surpassed cloud resistance and the arrows illustrated would provide feasible targets at $10.50 and $11 for more than 5% and 10% profit potentials from current levels. A more adventurous intermediate term strategy, perhaps with lower outright risk, would be to consider a long EWJ/short EWY strategy.