DAX March futures have been on the defensive all morning and are being closely tracked by pressure on France’s CAC40 as well.

Since January 28th the DAX has dropped more than 300 points, although there is chart support around 7500 where previous resistance is likely to be support and where there is likely (initial) support from the top of the cloud formation

The daily chart for the exchange traded fund, FEZ, which tracks the EuroStox 50 reveals how this index has dropped abruptly from recent highs and the very tiny star candlestick from yesterday (also an inside day) coupled with the rolling over of the MACD chart anticipated the 2% decline in pre-market US trading. 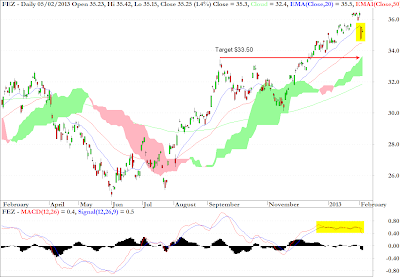 The near term target for support is indicated on the chart at approximatley $33.50.