The following weekly chart for Apple (AAPL) demonstrates - convincingly to my mind - the value of technical analysis and in particular the reason why being vigilant for negative (and positive) divergences can be very rewarding. 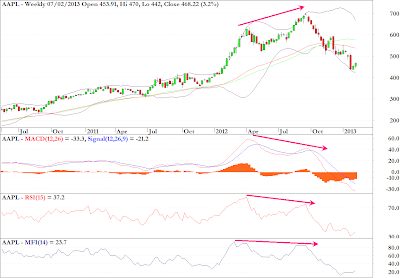 In particular as the large arrows on the different panes of the chart reveal there was a failure for the upward price trajectory - especially noticeable in Q3, 2012 - to be confirmed by three key technical indicators. The arrows for MACD and RSI have a very striking downward slope, and even that for the weekly MFI which has a less divergent slope but rather a plateau formation is indicating that accumulation was not taking place during the run up to the $700 level.
No comments:
Email ThisBlogThis!Share to TwitterShare to FacebookShare to Pinterest

The US dollar is displaying signs of a basing pattern against a basket of other currencies and this is reflected in the daily chart for the exchange traded fund UUP. The euro/dollar exchange rate is by far the largest component in the basket and there is evidence that euro weakness may lie ahead which would also impact the Swiss franc which is another component in the basket. The wild card is the USD/JPY rate which has already seen considerable strengthening of the dollar against the yen, but where perhaps, for political reasons, the Japanese government and BOJ may want to temper the FX market’s view that being short the yen was a sure one way bet. 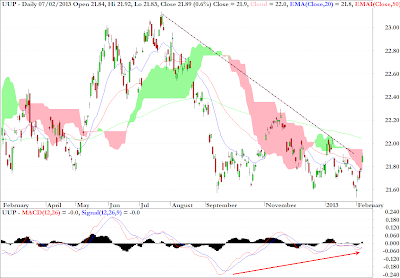 Technically the pattern shown on the chart shows several bounces off the $21.60 level in what appears to be a basing pattern with a positive divergence on the MACD chart. There are definite technical hurdles to overcome including the need for a definitive break above the dotted diagonal trend line and then resistance from the 200 day EMA (green line).

Expectations should not be for any dramatic upward moves for the reasons alluded to, but a long position would be my preference for a longer term positional play.