Updates on sterling and the Nikkei

Two charts that caught my eye as they reveal interesting patterns are the monthly chart for the Nikkei 225 and the weekly for GBP/USD.

A long term view of the Nikkei stretching back to the late 1980’s with the all time high coming on the last trading day of 1989 shows an almost uniquely spectacular and extended bear market in Japanese equities - with a decline from the peak of more than 75% seen since the 2008 crisis.

By focusing just on the more recent time frame and taking the mid 2007 peak and the 2009 trough it is remarkable that the 50% retracement of those two data points exactly coincides with the top of the cloud formation on the monthly chart. As can be seen the current level sits more or less astride the 38% retracement level where it is feasible that some resistance could be seen but I am confident that the 12620 level will be seen within the next 3-6 months. Different ways to gain exposure to Japanese equities are via the Nikkei Futures contract and a somewhat imperfect substitute, but with the benefit that it is US dollar denominated, is the EWJ traded fund. 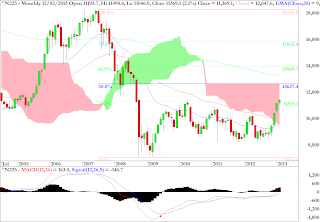 Sterling looks poised for a test of the lows seen in January 2012 and June 2012 in the vicinity of $1.5270 and marked by the arrow on the chart. The highlighted section on the weekly chart shows the most recent failures by sterling to move above $1.64 which is the 38% retracement level (from the November 2007 high to the March 2009 low). Also evident on the candlestick pattern is the gravestone doji formation registered in mid December of last year followed by the shooting star pattern two weeks later which again failed to break through the 1.64 level. 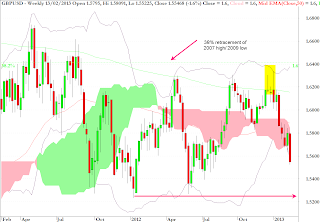 I have previously mentioned here the fact that there is a well formed triangle pattern on the weekly chart which extends back to the March 2009 low - and since writing that piece this triangle has now been decisively broken. Longer term I would suggest that from a technical perspective and with weak macro economic fundamentals and a diminution of sterling’s safe haven status (assuming that the Spanish and Italian governments can keep their ducks in a row!), it is quite conceivable that sterling could have a 1.40 handle.