I have been watching some very lively action today (20th) in commodities, precious metals and key FX pairs. Of particular interest is the price behavior of AUD/SGD - the Aussie dollar against the Singapore dollar. Since the yen is following its own logic at present, the Singapore dollar represents one of the best examples of a safe haven (risk off) currency and this is in direct contrast to the Aussie currency which is a great barometer of risk appetite. 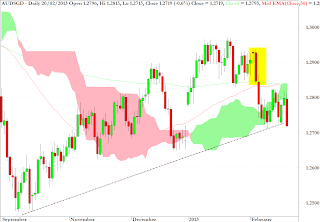 The daily chart captured at 16.10 GMT shows the Aussie breaking below a key upward trend-line which dates back to last September and this negative development is underlined by a noticeable failure to break above the cloud formation and also the intersection of the 50 and 200 day EMA.

I would suggest watching the resource currencies in coming sessions - especially AUD - as the performance of many commodities (notwithstanding rumors about a possible fund blow up) are pointing to a less than buoyant macro outlook for China and frontier markets.