After some weak economic data in the US (the Philadelphia Federal Reserve index) the presumption was that the anxiety about a phasing out of the Fed’s super accomodative monetary policy, which had preoccupied traders after the FOMC statement on Wednesday (20th), would be relieved with a renewed conviction that QE would not be brought to an early conclusion and that bad economic news was - as it has been for a very long time - good for equities and bad for the USD.

As Thursday’s trading progressed that presumption became questionable as there were a succession of time stamps when $AUDUSD, $NZDUSD, $AUDJPY, $NZDJPY, $EURUSD, $ESH3 and $NKDH3 were registering synchronized LOD’s.

It would be too far, in my estimation, to overstate the significance of the FOMC statement - some were claiming that it was a watershed event when the music stopped playing! - but there was a rhythm to trading today (21st) which suggested that the tide was turning towards one of selling rallies rather than buying dips. 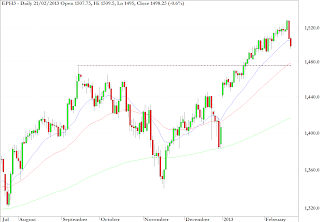 The daily chart of the S&P 500 futures suggests that a near term correction down to the 1475 level is feasible but until there is real evidence of a more robust US economy it would be imprudent to bet on much lower prices for US equities.