Will US dollar and S&P 500 remain inversely correlated? 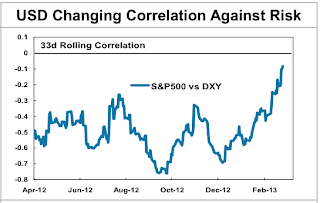 Here's the reasoning for Wiesenthal's view that everything is now fixed:

That's because during the crisis years, when people were in panic mode, they would rush to hold safe-haven dollars, dumping everything else. And then when they were panicking less, they would step out of dollars, and buy other stuff. But the chart above means the crisis is coming to an end, or has come to an end. There's no longer this phenomenon where the dollar represents something you hold when you're panicking about everything else. You can buy stocks, and also feel eager to hold dollars.

Not wishing to be a party pooper for its own sake, but let's try out another scenario where the US dollar continues to strengthen and it is entirely in accordance with the inverse correlation between US equities (and other risk on assets) and the USDX. Since 2008 central bankers have added more than $10 trillion to their balance sheets and have been virtually giving money away. The largest single systemic threat ahead of us (not in the rear view mirror) is the cessation of such a super generous monetary policy - the so called exit strategy problem.

The trigger for a new financial crisis might not even require an announcement by the Fed that they plan to begin a selling program of UST's - as suggested here but simply a recognition by the markets that the Fed will no longer be topping up the punchbowl. In the Alice Through the Looking Glass world where bad news has been good news for markets for so long, a strengthening US economy and a stronger US dollar could well lead to a sell off in risk assets as the Fed will be hard pressed to find new measures to prevent chaos in the Treasury market, even if that does require higher interest rates.

It's even conceivable that the Fed could continue to buy UST's and ratchet up short term rates at the same time...not something that may have been already "discounted".