The monthly chart tracks the very close co-movement of the Nikkei 225 and the Yield on the US 10 year Treasury note. For an explanation as to what the fundamental factors are which might help to "explain" this high degree of correlation - which is evident on the chart up until the last few months - the reader might want to consult my recent publication which is referenced at the top of this posting.

In recent months there has been a notable divergence in the paths taken by the two instruments. The evidence of the last couple of weeks is pointing to a reversion to the more typical paths of co-movement. The implication is that yields on the US Treasury note seem destined to continue rising while the Nikkei might have to continue correcting.

I shall revisit this rather extraordinary correlation in a few weeks to re-examine the extent of the expected reversion. 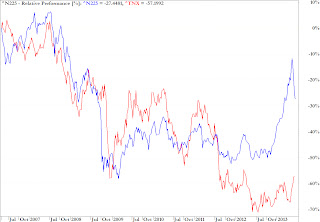